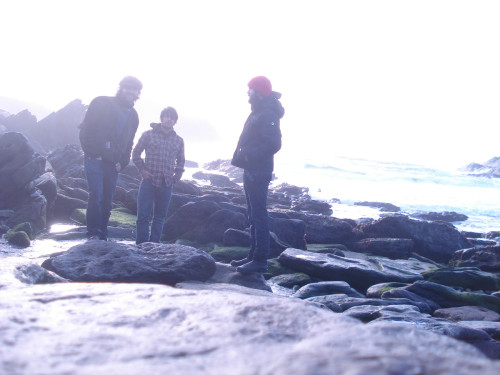 In 2008, following the release of their debut album, One For The Ditch, Easton Stagger Phillips embarked on a European Tour.  In order to maximize creativity during their time together, Easton brought along his portable recording studio-AKA a laptop and a Mojave microphone-and began recording the songs and White Album-esque snippets that were intended to be the bedrock for a second album.

Each member of ESP had new songs on deck and there was one -“The Road”- that was the trio’s first co-write (having been composed backstage at Paradiso in Amsterdam).  Recording sessions were done wherever and whenever the band found time and space – a frigid sitting room in Dublin, a laundry room and apartment right on the Damrak in Amsterdam, a friend’s basement in Germany, and a hippodrome in southern Holland.

After the tour, Easton took the rough mixes to his studio in Joshua Tree where he added a few flourishes, built a few more sound collages, and sequenced a project he called Overseas.  Soon thereafter, Phillips began physical therapy for a climbing injury and the boys put everything on hold. When the band re-surfaced 5 years later to make Resolution Road, they decided to start from scratch.

With the successful release of Resolution Road behind them,  ESP would like to offer up this batch of tunes that defined a special and nostalgic time for the three friends and songwriters.

Posted by Evan Phillips in Uncategorized on August 12, 2014